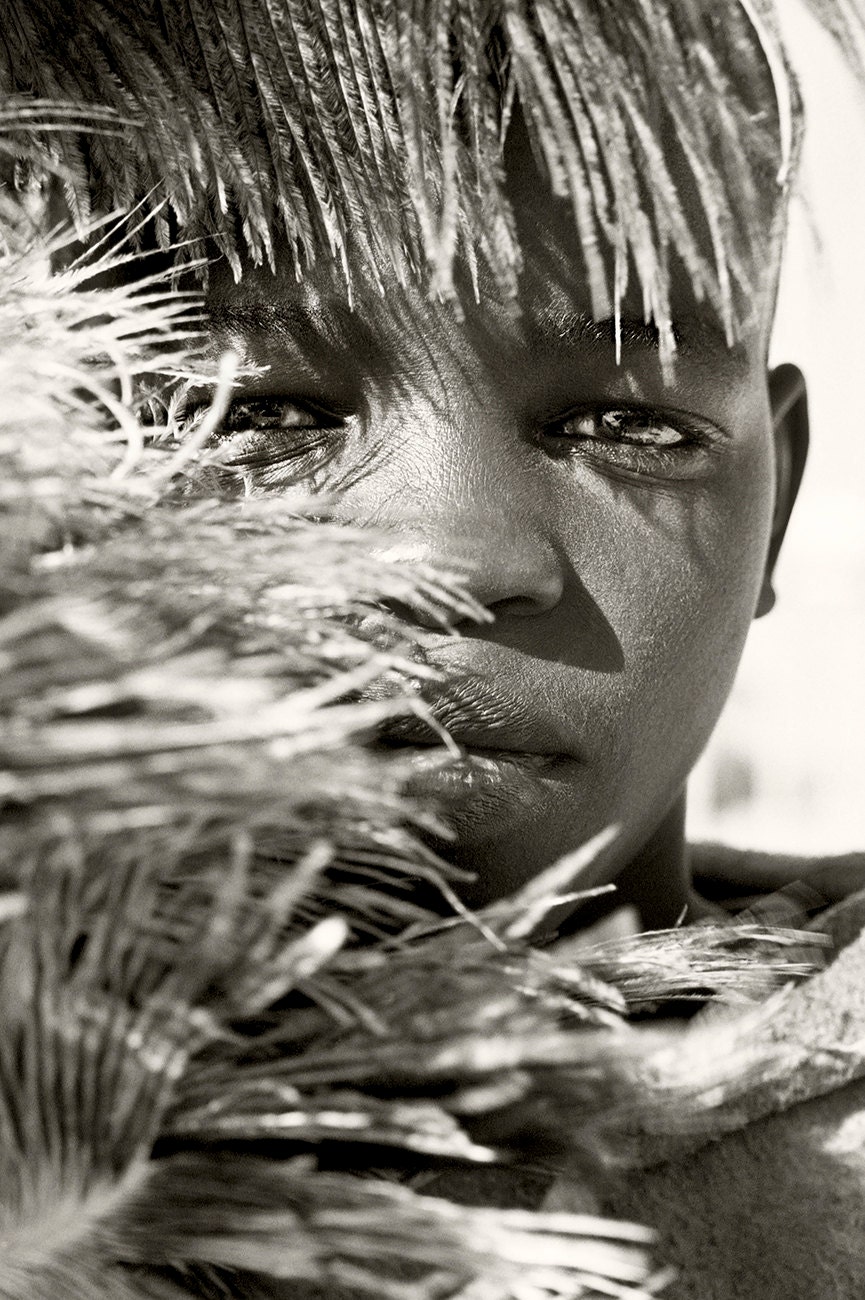 This beautiful black and white portrait of an African boy looking straight at the camera through Ostrich feathers was taken during a travel assignment to Cape Town several years ago.

Cape Town is a wonderful place to be with it's superb beaches friendly locals and the incredible and picturesque ' Table Mountain'. I actually lived there for 6 months by the beach at 'Camps Bay' many years ago and made some great friends there who I am still in contact with to this day. I found the people very welcoming and friendly and during my time there had numerous invitations to parties and barbecues most of which I went to !

For a photographer  like me it was paradise as there was always so much for me to point my camera at. I would often find myself driving around in my car and stopping every few minutes to take a picture of something or someone.

One particular day I was travelling towards my favourite beach called 'Nordhoek' when I noticed two African boys walking along the road carrying what looked like large feathers. It turned out that these were Ostrich feathers which the two boys had used to make feather dusters. They were walking around and knocking on people doors to trying to sell them. I admired the fact that they had made these wonderful feathers into something that they could sell ! It showed the entrepreneurial spirit and their determination to make a living from such a great idea. My instinct told me that I could possibly take a great portrait of these boys incorporating the feathers in the picture.  I Stopped my car and approached the two lads and politely asked them if I could take their picture. They seemed surprised and happy that I was so interested in them ! I was using a Mamiya 645 analog camera in those days and shooting pictures on good old Kodak Tri X 400 negative film which was my favourite at that time. I decided to take the portrait very close up because the boys had these large bright eyes which I though would make for a more powerful picture. I also asked this boy to bring the ostrich feathers across his face slightly to add some drama to the image.

Although i was grateful to the boys for posing for me I declined to buy one of their feather dusters but i did give them some money for their time. I was delighted with this portrait here and it is my favourite from the shoot of the two African boys. The eye contact is strong and I was pleased with the overall soulful feel of the photograph. The fact that it was captured in black and white makes it even better as it always seems to make for a stronger and more organic image.

My black and white photograph of the African boy is available in various sizes from the 'Black and White' section of my print sales gallery.

Sent from my iPad